I really wanted to makeover Devin's bedroom. When we moved in there were cute little airplanes painted on the walls. But Devin is not an airplane type boy. He is all about action figures and super heroes.

Devin's bedroom has an attic shaped room. (ok, I don't know the correct words for this shape. A frame? Anyway, the ceilings slope upwards.) So I thought it would be cool to have a skyline like Tam had for her Superhero room that would reach the top of his sloped ceiling.  I actually printed out the skyline for Houston where Devin was born, and Salt Lake City where we currently live. The main color is a light grey although it looks a little more blue than I would like during certain parts of the day.  But it's a nice relaxing color.

Don't you hate it when you're painting late at night and you run out of paint when you only have about 2 feet left to paint?  Grrrr..... 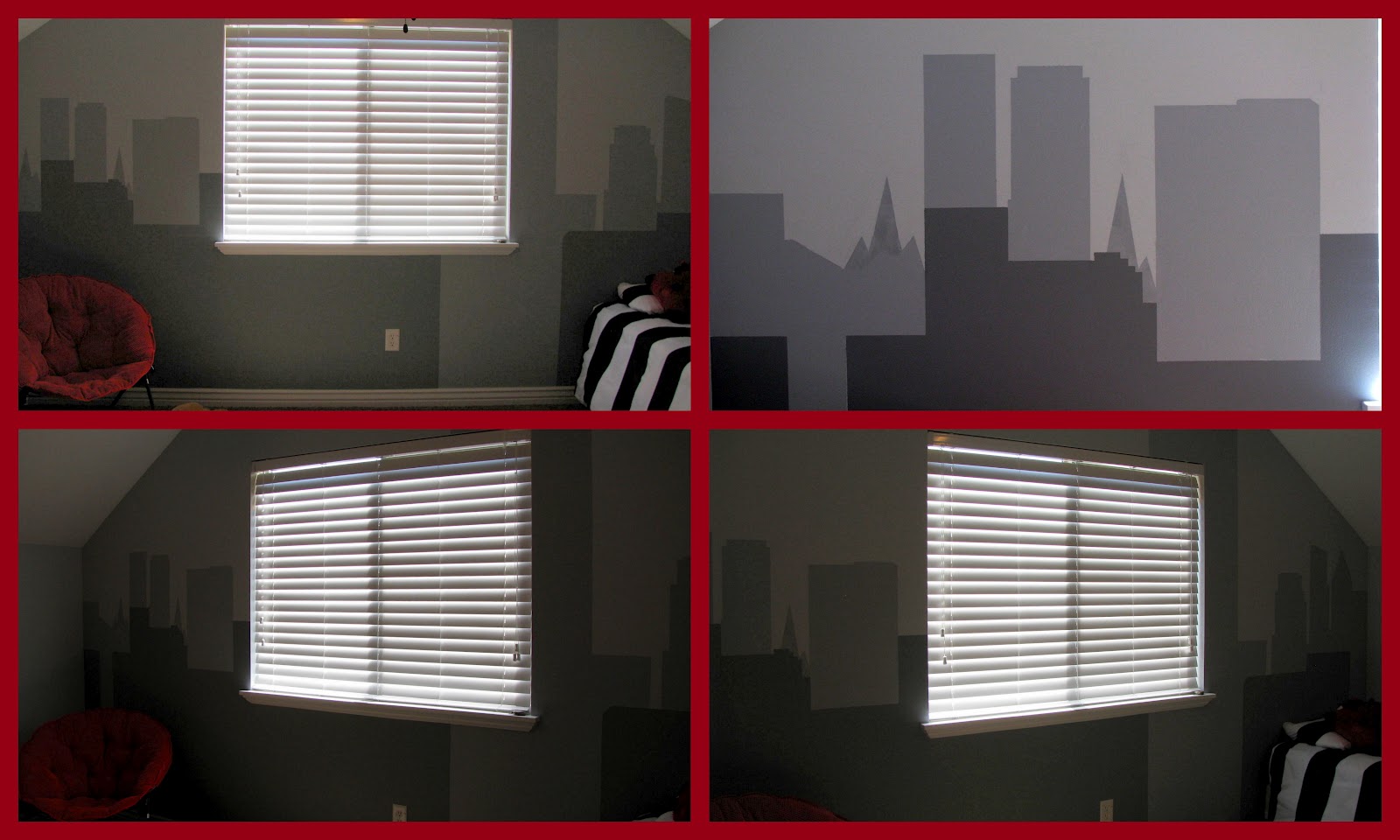 As always, I found inspiration from Cheri at I Am Momma for the superhero pictures.  I just bought 4 canvases and painted away.  This was a lot more enjoyable than painting those walls! 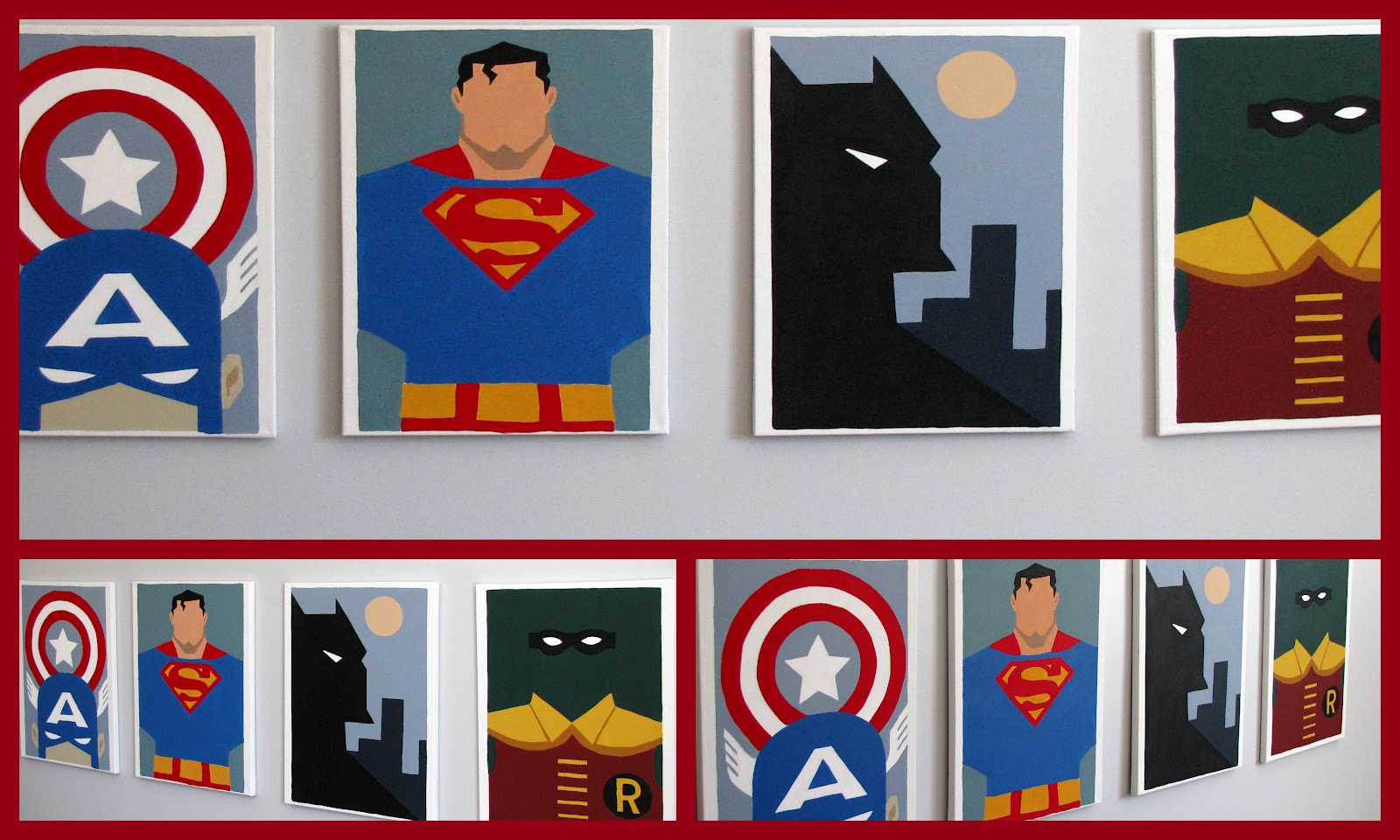 Ashley at Cherished Bliss had the cutest letters for her son.  I knew my son needed the same thing!  I couldn't find comic books to cover the wooden letters.  But I did find wrapping paper.  It looks good, but I would prefer smaller illustrations so I may recover these if I find some comic books I like. 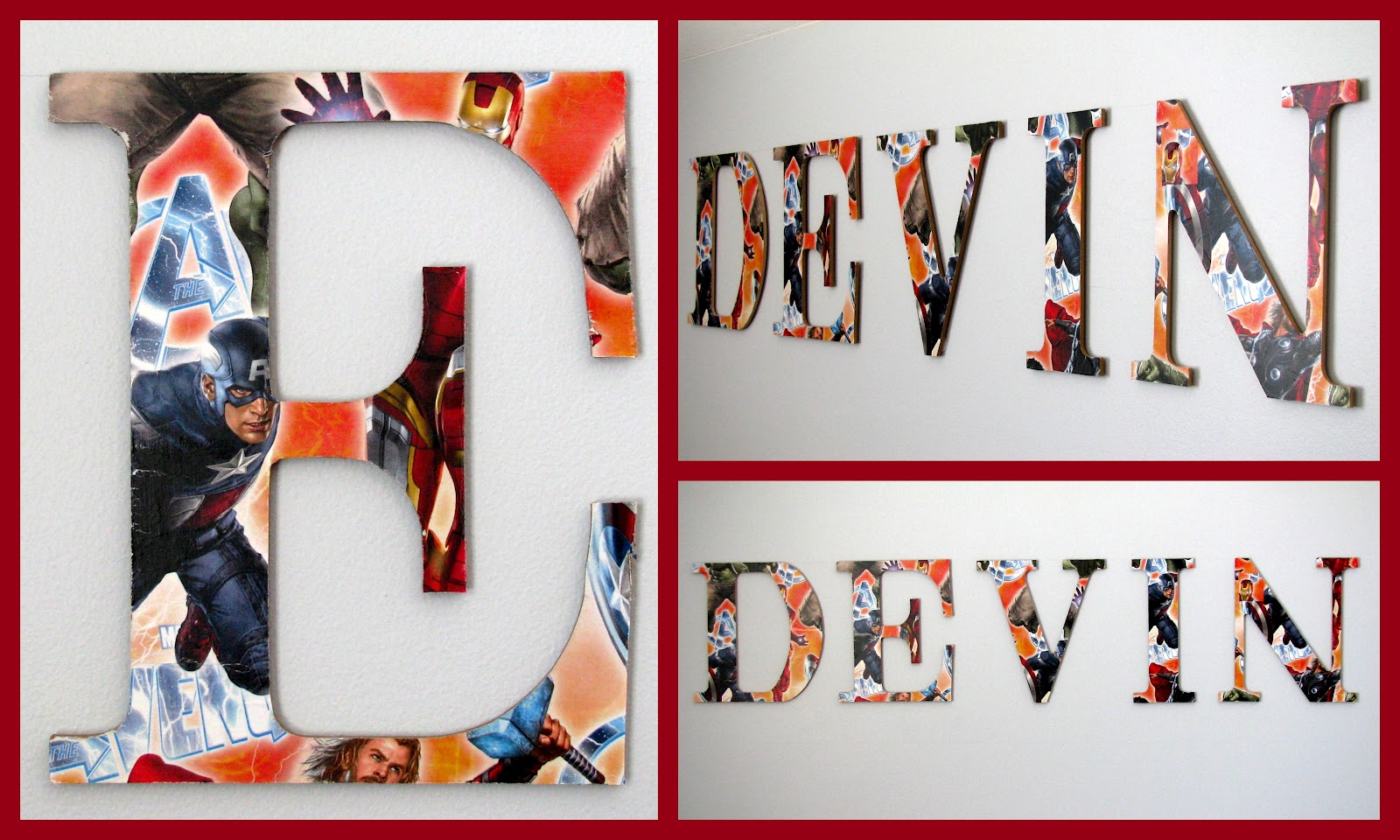 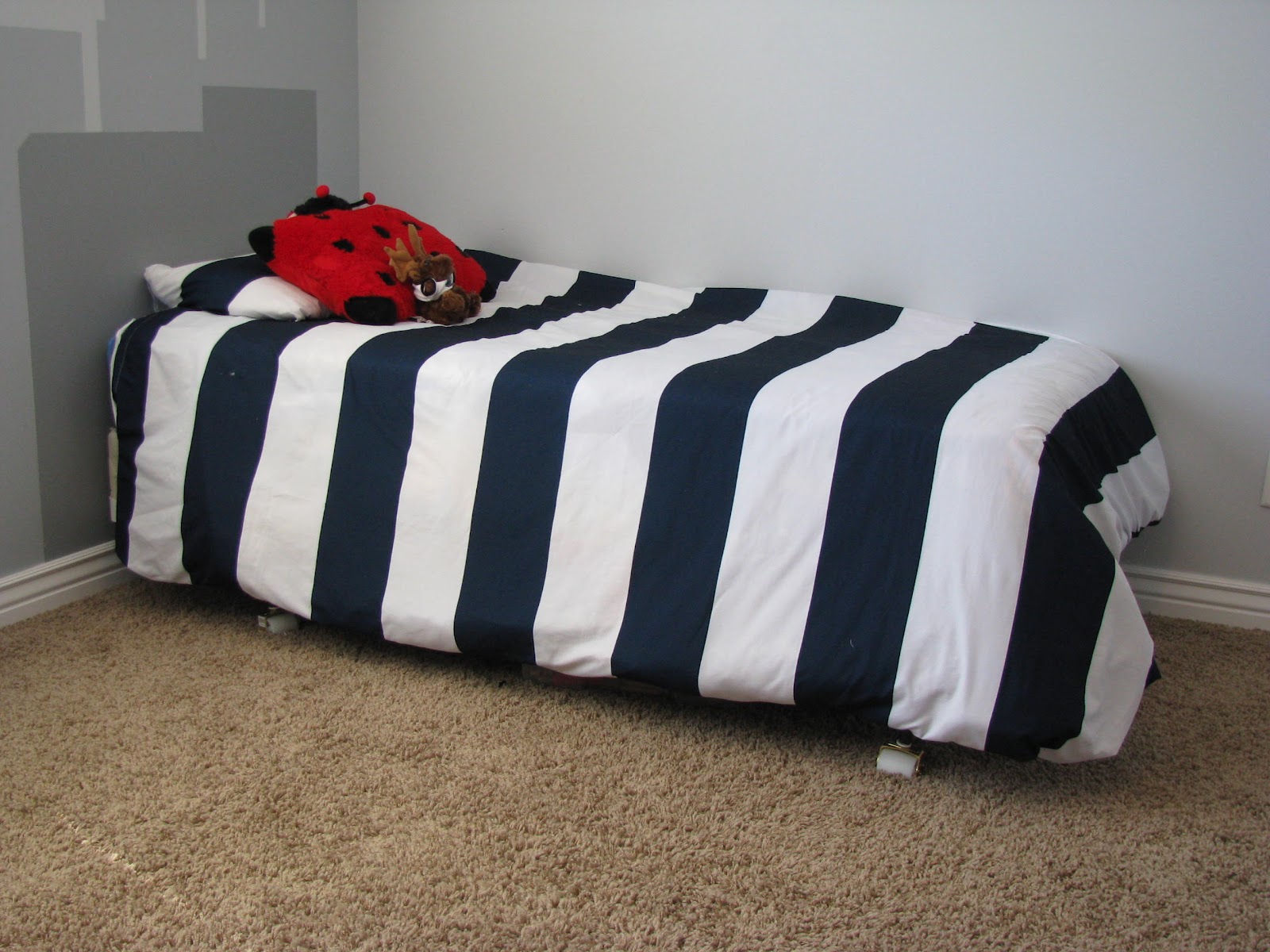 I found a cute duvet cover from Target for his current Star Wars comforter.  I want to sew some more ties onto that thing so it stays together better! 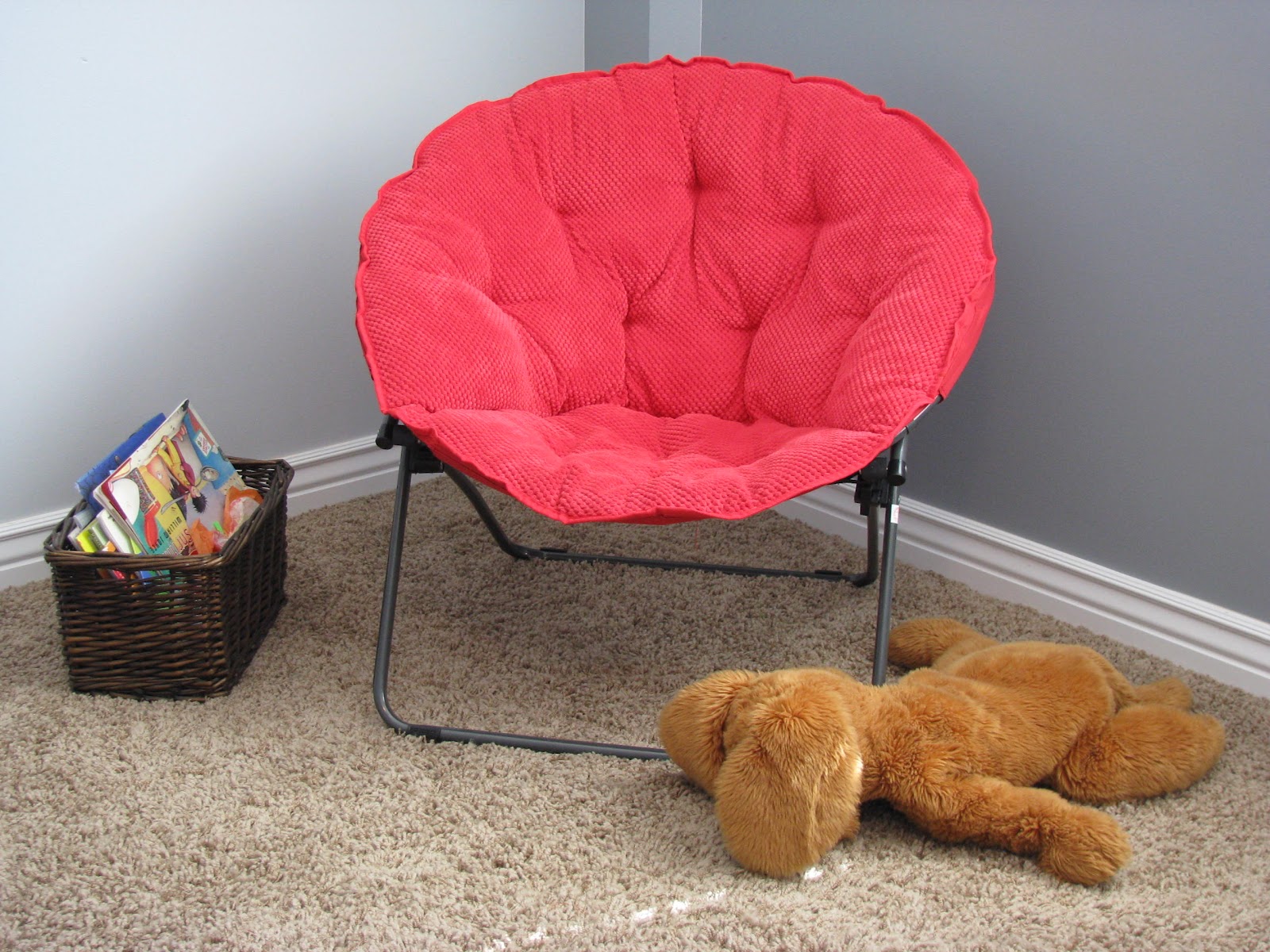 I also found at Target this red chair I knew would be a fun addition to his room.  Devin loves that chair!  I've even found him sleeping in it!

My Superhero son is happy with his room.  And I am happy with it too!  There are a few additions I would like to add eventually:

I need to get Spiderman into his room somewhere.  He's Devin's favorite superhero!
A Newspaper for his wall featuring Devin!
Sometimes being a brother is even better than being a superhero sign.
Do I dare to paint his closet door into a phone booth?

Yay!!!! I'm so glad you did this post! I texted you the other night to see if you were home because I wanted to ask if we could come see the room. Kenzie's husband wants to decorate the nursery with superheroes and she couldn't see it working. I told her about your city silhouettes and we jumped off from there. Your excellent plan inspired another! In my head anyway. Hopefully it will turn put as cute as yours did. :)