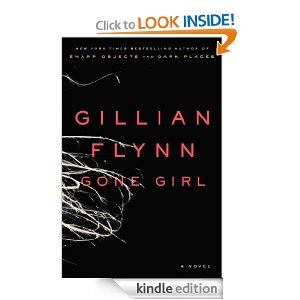 Wow! This book gave me quite the ride. I could never predict what would happen. There was one point where I actually said, "What?!" out loud because I did not see what was coming.

Nick receives a call at work from a neighbor who says the front door to his house is wide open and their indoor cat is outside. He goes home to find the living room has obvious signs of a struggle and his wife, Amy, is missing. The police arrive and begin to investigate. Nick then reveals that he has just told his 5th lie to the police. This is the moment where you know Nick is hiding many things from the police and his family. While Nick is covering his tracks, dealing with police, and spending time and spending time with his mistress, Amy has a journal that leads you through the time they met. She records her feelings during their courtship and marriage. I really enjoyed this book. I only wish I knew someone who read it so I could talk to them about it!

There is some foul language in this book for those that would be bothered by it.

Email ThisBlogThis!Share to TwitterShare to FacebookShare to Pinterest
Labels: Read It