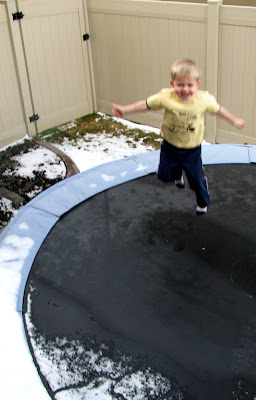 Who would let their son jump on a trampoline in the snow without a coat or shoes? Probably the same mother that let her child swing during a hurricane.

I have to fight this boy to wear a coat. He hates it. After this picture was taken I threw a coat at him and told him if he didn't put it on I would never call him Shocker again. For two days he's insisted that we call him Shocker. And then he refers to himself in the 3rd person.
"Shocker wants some peanut butter."
"Shocker loves chocolate."
"Shocker does not want to sleep!"

Don't forget to tune into The Jason Show for his 5:00 photo!

Scorcher.
More interesting than my son's choice of 'Grandpa' at that age. As in, 'call me Grandpa.'

Ever wonder how those things get into their heads?

He is hysterical! I can't wait to see him again.

And I see my friend Ami Mental is visiting you!

Katrine, thanks for always bringing a smile to my face!