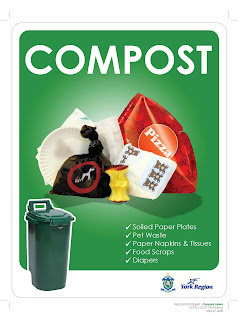 My Dad always said we did not have money for a garbage disposal. But we had chickens. We would dump any food scraps into an empty 5 gallon ice cream bucket under the sink. It was someone's job to dump the scraps in the chicken coop. It was such a vile job that it usually went undone. The food would just fester until someone (usually my mom) could not stand the smell any longer and would take the slimy bucket of crap to the filthy chickens.

My apologies to the environmentalist green mother earth lovers out there. I will do my part to benefit the earth. But I will never have a compost bin!

I plan on composting when I have a garden...but composted items will be immediately be brought to their final resting place, so you may rest assured.

We never had one. My Aunt Becky did though. We would take it to the fence and throw the scraps away after supper. Now we have a garbage disposal.

I would be okay with a compost pile if it were neatly contained, far, far away in a remote corner of the back yard, neatly enclosed.