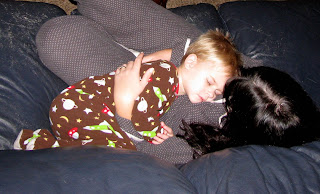 For our 4th child John and I were very relaxed about potty training. "He'll do it when he's ready."

But as he nears his 4th birthday and after countless nasty diapers I began to have visions of a kindergartner in a diaper.

And then after 4 days of only putting him in big boy underwear, it happened! It was truly thrilling! As he was mid stream I told him, "I'm so proud of you!"

As I was baking cookies later he said, "Mom, I'm so proud of you!"

Sadly, this little toilet going cutie has become sick. And as I held a bowl under his chin to catch puke he said, "Mom, I'm so proud of you!"
Pin It
Posted by Katrine at 7:09 AM

As he should be!