I just got back from getting Ethan's pictures taken. I was a little worried that he wouldn't smile because he's shy around strangers. But that boy had the best time. He was cracking me up! I'll share the pictures when I get them back.

Friday. A weekend. The kids have their first soccer games tomorrow. So, for the next six weeks my life will revolve around soccer. I am a soccer mom driving an SUV. Yup that's me. But it's all good!

Just a LO to share. Because that's what I do. I was taking shots of my children for Christmas cards. All was going well until Ethan decided he'd had enough of that. So what's a mother to do, but take pictures of her child having a melt down! I love the picture of him swinging his santa hat as he storms off into the woods. So funny! 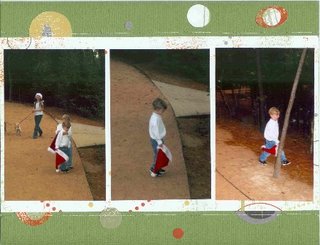 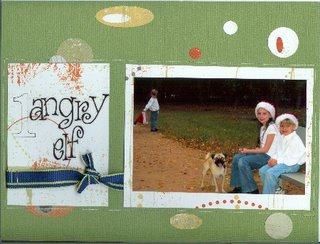 I have a surprise for Cameron after school. He's going to love it! I'll tell you what it is later because John doesn't know about it yet. So, I guess it's a surprise for him too! But the man never reads my blog anyway, but you never know!
Happy weekend!