Madison had an assignment in school where they had to make a hat to go along with a vocabulary word. The word she was assigned was "irascible." Yeah, I didn't know that word either. It means: 1. Prone to outbursts of temper; easily angered. 2. Characterized by or resulting from anger. 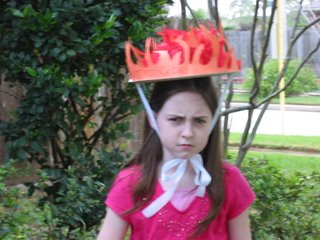 So this is the hat we came up with. It is supposed to be flames coming out of her head because she is so irascible she feels like her head is on fire! Madison had to also write and memorize a speech to advertise her word. Her class then voted on whose word they would buy. Madison won with the most votes! Her teacher asked if she could keep her hat for demonstrating for future classes.

Well, I've got a full day of sewing ahead of me. And I'm feeling irascible because I'm out of bread!